So you’ve got yourself over to Goa. Even though it’s a fairly concentrated area, you still need to move around a bit.

Taxis are fairly cheap. They have set rates which are ridiculously cheap, about 25p a km or hour wait time, but they never actually work for those rates. It’s the usual agree the price before getting in. But the prices they ask for are generally fairly consistent, i.e. if you were quoted £4 for a journey, a different taxi on the way back will usually quote you the same. Out of force of habit, we would knock a quid off and then chuck it back on as a tip. We went to the capital Panjin. It cost us about £8 to get there and we took a couple of other taxis during the day before returning. What we should have done was kept the taxi and had him wait and drive us around. It would have worked out cheaper and much more convenient.

Tuk Tuks are cheaper than taxis, but only take two people. And even cheaper again are scooter taxis which will quite happily take two people plus the driver. They are generally happy to load a ton of stuff and people on to scooters. You frequently see whole families with children standing in the front and babies squashed between adults. No one wears helmets. Their hospitals must be horrendous places full of banged up head injuries.

The cheapest way to get around is scooter rental. They are available everywhere. Even as a tourist you should be able to rent one for a couple of quid a day if you want it for a week or so. Car rental is not very popular but is available.

India is the new home of the Royal Enfield motorcycle. It was a British design that must be 70 years old now that an Indian company has started licensed production of. They make that Classic Brit bike big single thumping noise and look like they just rode in from a time warp. Personally I fancied hiring one. It was pretty much brand new, 350cc Bullet, latest model, great looking machine £8 a day or £35 for a week. But then we run into the next problem. 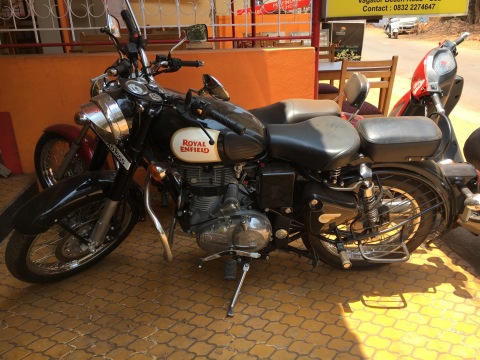 The problem with any vehicle rental is that it throws you right into the madness that is their road network. It is seriously crazy. It took me about three days to work out that they actually drive on the left because mostly they just drive down the middle of the road or anywhere they feel like. They constantly blow their horns, pretty much at anything or anybody they see. The idea being to alert them to the vehicle being there.

And then night falls, and the traffic madness takes a quantum leap. By then, a huge percentage of the drivers and riders are drunk! We met an Indian couple. He had worked in New Zealand for four years during which time he lost his license for drink driving. Up until that point it simply hadn’t occurred to him that there was anything wrong with drunk driving let alone that it might be illegal. He was more than happy to drive his rental scooter around when he was only just able to walk and oddly his girlfriend was ok with jumping on the back.

Personally I found the best options was to get drunk all the time and take taxis when we wanted to move between bars and clubs.